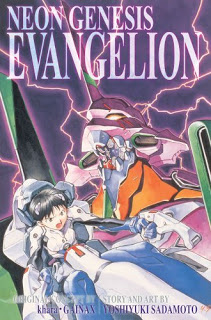 First sentence: "I've never had any cherished dreams or ambitions."

Publisher's Summary: "Once Shinji didn’t care about anything; then he found people to fight for—only to learn that he couldn’t protect them or keep those he let into his heart from going away. As mankind tilts on the brink of the apocalyptic Third Impact, human feelings are fault lines leading to destruction and just maybe, redemption and rebirth."

Reason for Reading: I love reading omnibus editions of manga series.  One is just never enough at a time, but 3 in a row gives you just the right amount of depth to come up for a breather as you wait for the next edition to come out!

Publisher recommends this for 13+ but I'm recommending for ages 16+ because of the language which uses a lot of curse words (NOT the f-word, but everything else) and there is female nudity.

Vol. 1 starts right in the middle of things and is a fabulous way to begin a manga series.  We're just thrown into an intense situation and learn what is happening at the same time as an almost clueless character.  Shinji's mother is dead and he has been abandoned by his father at boarding school for the last three years when suddenly he is whisked away at his father's orders.  Shinji seems like a nice enough guy though he doesn't really care too much about other's in the grand scheme of things.  But we feel for him when we meet his father, a belligerent, unfeeling tyrant who shows no emotion to Shinji and has brought him to headquarters where he can (for some reason) be the only suitable replacement pilot for the huge fighting robot "Evangelion".  Basically his father has brought him here to be a warrior (for which he has not trained) and realistically to meet his death in battle.  Nice guy ... hate him already.  Shinji doesn't want to do this but Japanese culture takes over and he does do it out of pride and honour   Shinji is 14 (I think) and a young but grown-up woman scientist befriends him, sympathetic to his father's treatment of him.  Great battle scenes which are very easy to follow and an immensely intriguing opening volume to this post-apocalyptic sci-fi manga.  5/5

Vol. 2 has me hooked on this series!  Concentrating on character and putting battles on the backburner we really get to know Shinji and Misato.  I just love Misato!  She is a lovely young woman, funny and amazingly at this point in the series, multi-layered.  The relationship between the two gets off to a rocky start as both misinterpret the intentions of the other but both come to tell the other the truth of their hidden personalities.  Can I say I loved it again?!  We get glimpses of Rei, who the extra material at the end of each volume (interviews, etc.) let us know will be a major character and Shinji's father only shows up briefly.  The book isn't entirely plot and character though as we get one good battle scene towards the end.  I can't wait to read the last volume in this omnibus.  5/5

Vol. 3 brings Rei into the fold and introduces her as a character.  There is mystery surrounding her; she is totally devoid of emotion, seems to have been wiped of memories prior to when she came to be an Eva pilot and most confusing of all to Shinji she is enamoured with and puts all her trust and faith into his father who still barely speaks a word to him.  Shinji finds himself attracted to Rei and they have a very embarrassing first meeting (for him anyway); he sets out to befriend her.  Battles feature prominently as we go into the past to learn of Rei's accident the brought about the calling of Shinji and the enemy comes again to attack headquarters prompting the sending of both Rei and Shinji in their Eva's out to work together as a team.  Shinji's father is also given a bit of a break as we are shown that he has a human side after all but this doesn't redeem him in anyway in my eyes.  A thoroughly satisfactory conclusion to this 3-in-1 omnibus.  I greatly look forward to the next volume!  4/5
Labels: 1995 1996 2012 5* manga science fiction viz media YA