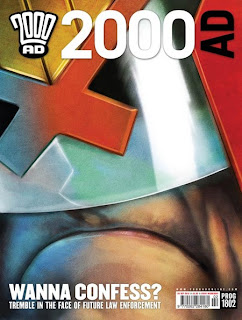 Reason for Reading: Next issue.

Judge Dredd: Payback 2 - The continuation and conclusion of last week's story where payback comes from two different sources and we're shown who it's OK to dole it out to.   4/5

Bob Byrne's Twisted Tales #15 - I do not do well with wordless comics and was reading this disturbing tale until I got to a point where I went "HUH?"  So I skipped ahead, figured out what was going on and came back and tried to figure the part where I got lost, sort of did, but I understood much better now and restarted from the beginning.  This is a weird and vicious tale. 4/5

Brass Sun: The Wheel of Worlds Pt. 3 by Ian Edington - Still loving this!  Natural continuations of the plot carry on at this point with the fate of the Bishop concluded and Wren giving herself away leading those looking right to her.  5/5

The ABC Warriors: Return to Earth - I'm finally getting a grip on this story.  The artwork goes to black and white as Hammerstein relates his story from the past of when he returned to earth and the political conniving that had summoned him there. Hammerstein has no great affection for Earth though and would rather stay with his brothers on Mars and we leave the story with him possibly changing his mind. 3.5/5

Grey Area: This Island Earth Pt. 3 - This is my favourite continuing story after only three consecutive reads.  While talking to the Ambassador, Buillet antagonizes him letting him know that if he wants to push the law, he, Buillet, is willing to push it right back at him.  This gets him flung out of a window with the flick of a finger but the Ambassador has shown his hand, shall we say, now.  5/5
Labels: 2000AD 2012 4* comic book science fiction YA