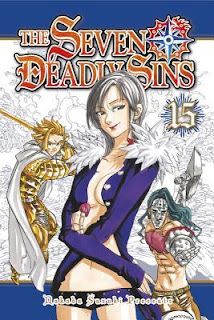 by Nakaba Suzuki
My rating: 4 of 5 stars

This is an action volume with lots of battle. It is also the start of a new arc. Giants like mountains are attacking and we learn of the return of the evil Ten Commandments and meet the first one: Truth. The story switches narrative between Fairy King and Ban, and the rest of them at Camelot. These new villains look pretty cool and things get pretty violent in the battles. Good start to a new arc.