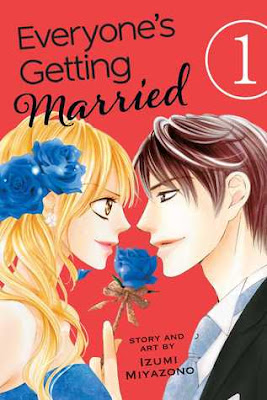 by Izumi Miyazono
My rating: 4 of 5 stars

Either I'm starting to like romance or this is just a well-written manga. I'll go with the latter. This is a grown-up book; the audience is josei and the rating is "M". Nothing mature happened yet but this is the first josei I've read that I've liked. It is pure romance and has the typical hating each other to start off with but by the end of vol. 1 they are dating, so that is not the issue. The issue is that she is looking for marriage and wants to be a homemaker, while he would "rather die than get married" and has been used to having affairs only. But they fall in love and they decide to love the person instead of their ideals and see what happens. I have to admit I liked the interaction. The guy acts like a jerk but isn't one and I really like the pro-woman and -femaleness of the topic. Being a homemaker is defended and while she meets resistance all the time, so far, the book is portraying those types of womanly yearnings as positive. I really liked that. I'd definitely read the next volume!