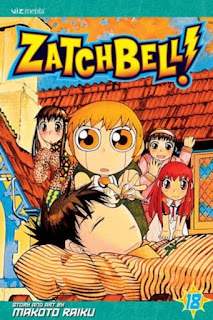 It's been almost a year since I read the last volume but things got in the way and this series got pushed to the bottom of the tbr. Fortunately, I had stopped at the end of a major arc and jumping back in at Vol. 18 was seamless. A quick "story thus far" refreshed my memory and then all these wonderful characters are back in my life again. Zatch and Kiyo pick up a couple of new Mamodo and their owners. The first engages in battle but ends up helping them out in their next battle with what appear an evil pairing. However, they come warning of two especially dangerous mamodo items now in the human world that must be destroyed, one of which is one of Zatch's spells. This spell which Zatch and Kiyo have just discovered its secret but why is this secret spell so dangerous! One of the things I love about this series is that while being your typical battle shonen manga it also has a serious emotional side. In this volume, Suzy faces the fact that Kiyo is close to another girl and she may never have a chance at being more than his friend. Well done and I'm back to remembering why I love this series. If it came out in 3-in-1 editions I'd certainly buy it!!