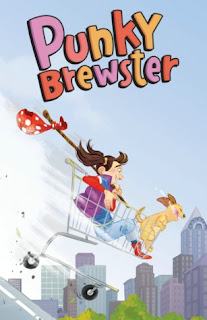 by Joelle Sellner
My rating: 5 of 5 stars

My sister is the "Punky" fan and as a kid I was forced to watch "her" shows to get my turn, so I wasn't exactly sure what my opinion of this graphic novel would be. Surprise of all surprises I was completely smitten! What an adorable sweet story of an abandoned girl who is full of escapades. Having grown up on the streets, she is an escape artist and *very* creative but also an honest, smart, old soul. This volume starts with Punky as a street kid helping another street person, a grown-up, rip-off a store and then tells the story of how Punky moved from street kid to foster kid, to finally, being awarded to Henry as foster parent. It's a long hard process full of ups and downs and lots of sweet and comic moments. I absolutely adored it. A couple of things to mention, this being taken from an '80s show, the whole foster home/ adoption process is pretty much fairytale unrealistic though it does hit on the topic that the system does not listen to what the children want. So don't expect realistc from this aspect of it, think more like ... quaint. The story has been moved to modern times, there is email, DVR's and digital cameras, etc. Finally, in the show Henry is an old man (grey hair, cardigan) but I like how his character has been modernized in the book; he's talked of being too old to take care of Punky but he's only 50 and drawn as a sophisticated man wearing jeans and a variety of jackets, shirt, sweaters, etc. He is actually related to Punky in the comic in a round about way and I don't believe they were related at all in the show. Anyway, absolutely adorable story. Loved every minute of it!