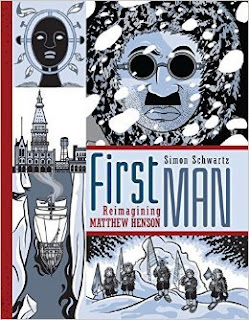 by Simon Schwartz
My rating: 4 of 5 stars

A fictionalized biography of African-American Matthew Henson considered to be the first person to set foot at the North Pole even besting Perry, his Commander. While being a story of Arctic Exploration and of a forgotten black hero it is also a tale of the Inuit. Matthew Henson became a legend to the Inuit people of the area and they have art and stories depicting him. A fascinating piece of little-known history illustrated with exceptional art in shades of blues and browns. Especially delightful is the Inuit style pictures. The book also takes a hard look at the prejudice ingrained into the life of an average black man from Northern US during this era in history. Eye-opening on many levels. Lovely piece of work.