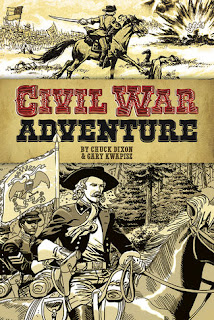 A reprint of a book with a limited run originally published in 2009. This graphic novel is a series of short stories that combine to tell the story of the Civil War mostly through the viewpoint of a father and son serving under Stonewall Jackson. It's an incredibly readable history volume with real facts except for the fictional father & son. Different presentations are used throughout from single pages of text to maps to frames of comics with only narrative to full comic style with speech bubbles. Interspersed between the story of the adventures of Ty and his father as they join the Confederate Army and go off to war are shorter stories of famous people (ie Custer), other events (ie an ironclad) and letters home from various soldiers in the field. This is a harsh look at war, death, disease, depression, desertion. While there are a few episodes from the "Federalist" side, the book decidedly shows the war from the "successionist" point of view and makes a point of making slavery *not* the point of the war for the average volunteer farmer or mountain boy who signed up. Also of interest are one-page history lessons on such topics as certain guns in use, the birth of the sniper, certain famous people, battles, and campaigns. I enjoy reading about the Civil War, especially of the South, and fully enjoyed this. It's not in-depth but gives a good overview for a student or is simply entertaining and informative for any age.