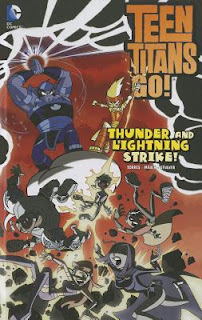 
I like the Teen Titan comics for kids. They are funny and goofy rather than the angsty teens in the regular series. This one was funny and had a few laughs but was a bit preachy. Brothers Thunder and Lightning come to town fighting and destroying stuff and next thing you know while trying to stop them the Teen Titans end up getting into the fight too. Lesson learned is to use your words instead of weapons. 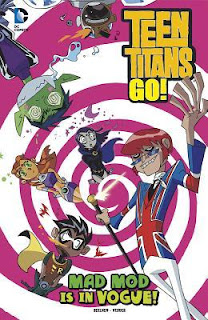 by Adam Beechen
My rating: 4 of 5 stars
Source: Publisher

This comic is a lot of fun with the Teen Titans meeting up with an old nemesis of theirs, Mad Mod. I haven't been big on the Titans so this is my first meeting with the villain who is a retro British dude whose power is hypnotism. Beast Boy and Starfire get hypnotized along with the rest of the city and it's up to the remaining team members to rescue everybody. Pure comic book action perfect for young ages.