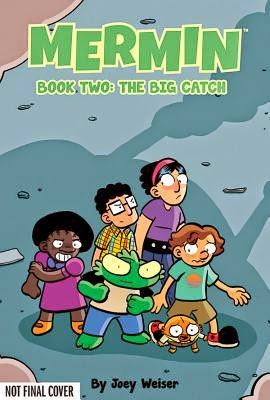 Mermin Volume 2: The Big Catch by Joey Weiser
My rating: 4 of 5 stars

Whoa! This is so much better than the first one; I'm really glad I continued on with this series. I love the art, Mermin is so cute but whereas the plot in the first one was lame here we have a very action-filled plot from beginning to end. The book begins with two guys trying to capture Mermin and doesn't end until, well I won't tell you how it ends. However, they are on the go from page one. One new character is added to the gang, a girl, a tough girl, which was needed as she seems to round out the main cast of characters nicely. We also learn Mermin's secret but there is a part he isn't telling us about and I'm looking forward to finding out with his next adventure in Book Three. 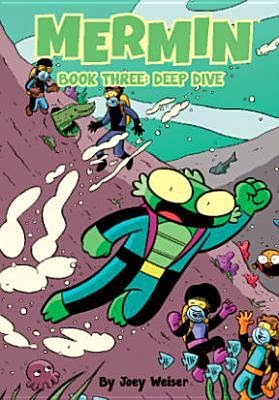 And the adventure continues! Book Three was delightful.. Of course, I had expected an underwater adventure and wondered if Atlantis would appear, and this is where it all happens. But Mermin is from the Kingdom of Mer and they and the Atlantians have had their bad feelings towards each other escalating for some time now. We finally find out the problems in Mer that sent Mermin up to the surface to escape it all. I love DC's Aquaman and this is a humorous kid's pastiche along those same lines. I liked how the book opened to a page of the characters with their names. Mermin is learning he has more powers than he thought he did, but how will he learn to tap into them and control them? Quite the adventure here, again with an action-packed plot and this time the book ends with a big crisis leaving us hanging in the wings until Book Four comes our way. This is a fun series, even though I really wasn't impressed with the first book I'm glad I continued on. I will certainly be keeping up to date with this cute series.