I am behind in posting a review about this.  I received this in December but was immersed in the staggering pile of Cybil Award graphic novels that had to be read beore our Judges meeting.  Then of course Christmas came along!  Anyway ...

I was offered a complimentary box for review purposes.  I was sent Comic Bento's October box which I received in December a couple of days after they said it was shipped.  As you can see from the picture you receive a nice colourful big sturdy box. 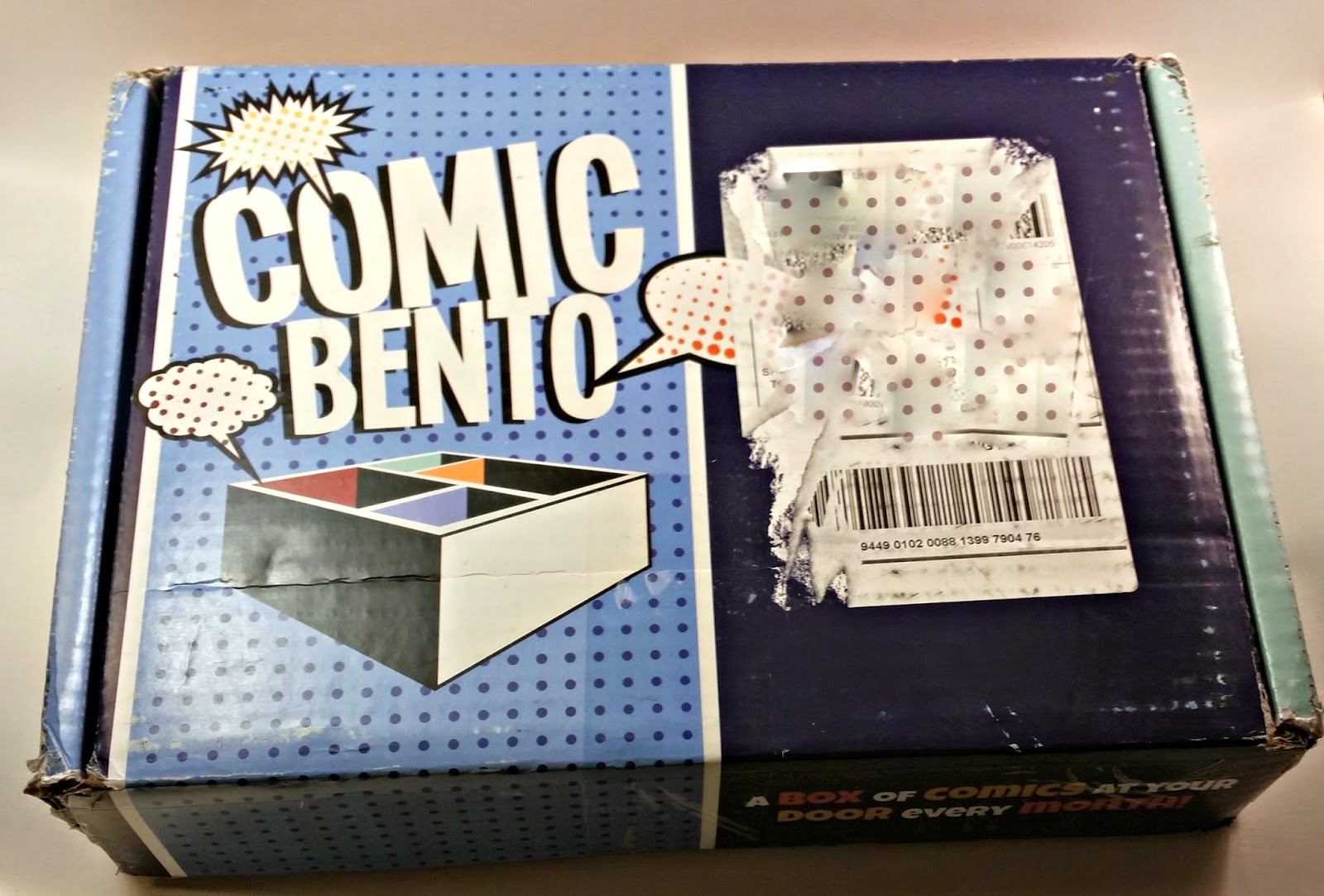 There have been a few changes since I received my box so I'll tell you about them now: each month has a specific theme (February's upcoming theme is Feminine Mystique) and you also have the option of a "Kid Bento" which, instead of the monthly theme, is a box full of kid-friendly comics suitable for the whole family.

So my box had no theme and contained books for various age groups. I opened up the box to find the books wrapped in bubble wrap and sealed in plastic with a stiff piece of cardboard which protected them very nicely.  Except one book was oversized and placed on top getting a bit of curlage since it was wider than the box.  It straightened out after being put under a pile of other books.  There is also a one-page letter (which I don't read at this point), a bookmark, sticker and 50% off my first box subscription coupon.

ETA (after posting this, I did read the newsletter and the themes are not new!  This box's theme was Funny Pages)

I'm not going to review the books here, I'll do that individually as I read them as the purpose of this review is my impression of this subscription box.  I received five graphic novels.  Comic Bento promises they will send you at least $60 worth of books so I imagine the number will vary depending on the prices of what you get.  Following is what I received and my impressions as I opened my surprise package. I'm also including the $ values so I can give a final value of the box versus the cost of the box.  I'm Canadian and the cost of the box is different for me than US Customers which will be cheaper and I'll discuss the value at the end.

The Most Dangerous Game: A Saturday Morning Breakfast Cereal Collection by Zach Weiner:  This is the oversized book and is thin.  The cover is interesting and it is from an indie publisher, Bread Pig.  I like that.  I wouldn't want to be getting books I could have easily already have myself.  Looking through I see it's a collection of comics, there's no summary on the back so I don't know what it's about but the contents look interesting. Looking it up on amazon, it has an average rating of 4.6.  I'm pleased. ($18.00) (only available from the publisher in Canada)

Archer & Armstrong: The Michaelangelo Code, Volume One by Fred Van Lente - This I'm excited about.  I've always wanted to read Archer & Armstrong! This is published by Valiant and there's no need for me to look at it anymore because I'm thrilled. ($9.99)

Yield to Me To Me (Least I Could Do: The Complete 5th Year Collection) by Ryan Sohmer & Lar Desouza - I haven't heard of this.  The cover is appealing, perhaps funy, makes me wonder the context but also makes me wonder if it might be too risque for my tastes.  This is from another indie publisher "Blind Ferret Entertainment". I'm interested, let's read the back summary ... I'm not sure if this will be for me, but I'm excited.  These guys are Canadian! It's kind of a "Friends" thing, but the main character is a sex-obsessed narcissistic 25yo corporate executive.  Browsing through it, it's not too risque for me. There are lot's of pics of him in bed alone or with a girl but the covers are always under the armpits and the f-word is spelt "fuq", which is funny itself because these guys are from Quebec and the French word for seal (the animal) is le phoque, pronounced "fuq".  Looking forward to this one! (19.99) 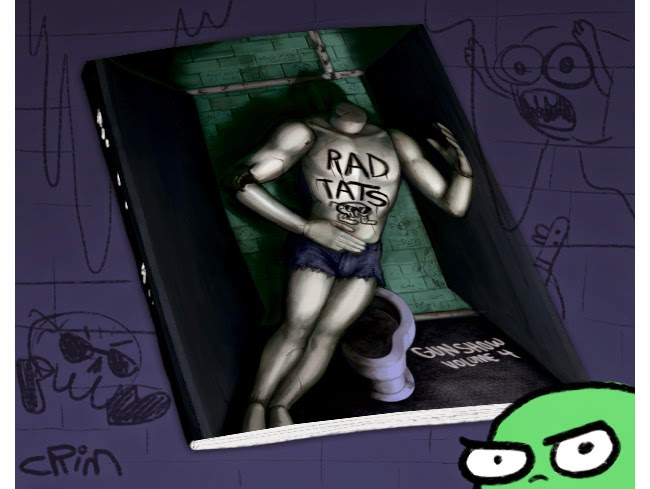 Rad Tats: Gunshow Vol. 4 by KC Green - Again something that I've never heard of by an indie publisher, TopatoCo.  Looks like the author might be Canadian too!  The cover has me as it is dark and gloomy.  Looking inside I see b/w art, skulls, people pouring coffee in their heads and what looks like dark humour.  This is my type of thing.  Again I'm happy to give this a go. ($15.00, only available from the publisher)

Rabbids #1. Bwaaaaah by Thitaume - This is the only disappointment and that's because I've read it and didn't like it.  *But* I did want to read it because it looked so cute and the only reason I got to read it is that I get review copies from this publisher, Papercutz, whose stuff I usually really like.  ($7.99)

Now let's see how the subscription works out money-wise.  First of all I love getting mail, especially books in the mail so we have to keep in mind that there is a fun factor in here of opening this "present" each month.  If I were to subscribe I would start with the 3-month offer to give it a fair go which is $18.34 a month + s/h.

For Canadians, Comic Bento is situated in Quebec, so you will have to pay GST on the S/H and depending on your province, PST or HST and then again on whether you are taxed on books.

So, yeah, if I had the money I'd definitely give them a try and see if I was enjoying what they were sending.  If it's a wide selection of publishers with some indies and new-to-you stuff  that is not available on amazon and you are not likely to have already gone out and bought; it could be quite broadening for an avid GN reader.