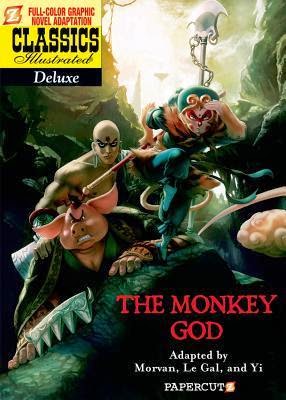 Classics Illustrated Deluxe #12: The Monkey God by Wu Cheng'en by Jean-David Morvan. Illustrated by Jian Yi
My rating: 5 of 5 stars

Undoubtedly the best entry in this series from Papercutz. I do admit, though, to having a special fondness for Asian legends, especially Chinese. This book is a departure from the usual titles presented in this series; as rather than bringing us an adaptation of a familiar classic we are introduced to a classic that forms a part of Chinese culture and yet is hardly known in the West. There is a wonderful introduction and editor's note explaining all this with delightful insight. One curious aspect, for me, is that this story was used as a light base for the Dragonball manga series and being a huge fan of that, I delighted in seeing some of the similarities. The art here is fantastic, captivatingly beautiful and the frames have been used in particularly imaginative ways. The story barely scratches the surface of the original which is 100 chapters long, written in the 1500s and bases itself on a true story from the 700s, minus all the dragons and demons. It doesn't take long for the reader to realise this is where modern times found its inspiration for the "fantasy quest" and role-playing games. Starting with a hero who sets out on a quest, along the way he fights various monsters but also meets people/creatures who he needs items from but they send him on side quests where if the hero finds item B they will give him item A he had sought from them in the first place, and along the way he meets companions who join his party and quest. This will appeal to a large group of readers and I highly recommend it, even if you are not a regular graphic novel reader, as it is an historical classic we should all be familiar with.