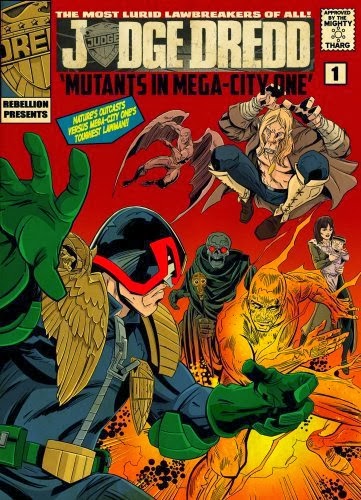 "MUTIES OUT! The great Atomic Wars of 2070 created a population of mutants who, due in part to their bizarre (and in most cases grotesque) deformities, have been denied citizenship in Mega-City One. Rejected by the prejudiced ‘norms’ and forcibly kept away from the city by the Judges, the mutants have had no choice but to live in the vast, radioactive wasteland known as the ‘Cursed Earth’. Harboring resentment and hatred against those that have exiled them, bands of mutants now prey on those that stray from behind the city walls – and sometimes even launch all-out attacks in a bid to gain entry to the Big Meg! This action-packed collection features classic encounters between Judge Dredd and mutantkind!"

It's been a good nine months since I sunk my teeth into a good Judge Dredd collection and this made me feel right at home.  The focus in this collection is obviously the muties.  I love the mutants because the stories involving them remind me of the bar scene in the original Star Wars. LOL.  The book is mostly in colour but does start out with some early b/w comics. Spanning from 1977 to 2011 we do actually see character development of Dredd as he gets a conscience about the mutants.  Most of the book has stories when the mutants were confined to the Cursed Earth and these ones we often feel for the mutants rather than Dredd and the other Judges.  Then the last several stories take place after the muties have been allowed to become citizens and live in Mega-City One.  Dredd now, of course, has more compassion but we also see that whether mutie or norm, a criminal is a criminal.  I enjoyed this entire collection; most stories were serious with only a few bits of camp and cheese included for good old fun.  While I liked some more than others, the only one I didn't like was the last short one.  Fans will love this collection and it could make a good starter for newbies to the Dredd Universe.
Labels: 2000AD 2013 4* graphic novel post-apocalyptic science fiction