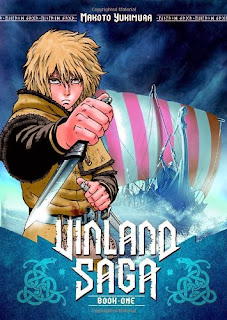 "As a child, Thorfinn sat at the feet of the great Leif Ericson and thrilled to wild tales of a land far to the west. But his youthful fantasies were shattered by a mercenary raid. Raised by the Vikings who murdered his family, Thorfinn became a terrifying warrior, forever seeking to kill the band's leader, Askeladd, and avenge his father. Sustaining Throfinn through his ordeal are his pride in his family and his dreams of a fertile westward land, a land without war or slavery...the land Leif called Vinland.."

Purchased from a local bookstore.

I have not ever read a manga anything like this before.  An epic sweeping Viking historical fiction saga that reads like a novel.  Absolutely brilliant.  This English translation actually combines books 1 and 2 of the original Japanese giving us a magnificent starting volume.  Starting off in Thorfinn's present the reader is introduced to the situation he is currently to be found then the rest of the book goes back into the past to tell his father's story and how Thorfinn came to be the avenging youth he is today.  An epic story full of historical detail; Frankish, Dane, English battles with each other and the Vikings, pirates, mercenaries, and tales of exploration from Leif Ericson himself.  Since Ericson is a true historical figure it makes me wonder if any of the other characters, perhaps minor ones, are historically true, but I don't recognise any names and there are a lot of people passing through so I'm not about to look them all up.  Anyway.  An engrossing read that had me glued to the pages!  The art is astounding! The backgrounds are highly detailed and intricate making beautiful landscapes and scenes.  While most of the characters have the usual distinct manga facial features, the adult men are dawn more realistically and there are some panels which are wonderfully lifelike.  There is a lot of emotion and drama in the story and I finds myself already heavily committed to characters.  At the end of the book there is also a bonus story which is set in Edo period Japan and promises to continue in the next volume.
Labels: 2013 5* historical fiction kodansha comics manga T+. OT vikings YA