388. Will o' the Wisp: An Aurora Grimeon Story by Tom Hammock

Backing up a bit here.  This is the last book I reviewed in 2013 that hasn't been posted yet. 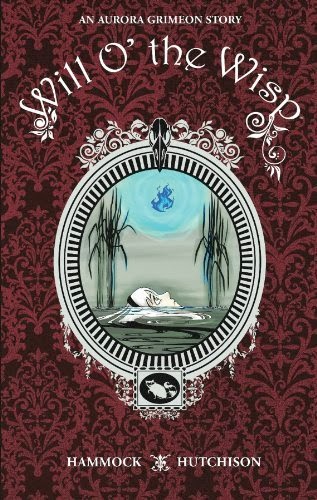 Will o' the Wisp: An Aurora Grimeon Story by Tom Hammock. Art by Megan Hutchinson (buy)

"After her parents’ accidental death by mushroom poisoning, young Aurora Grimeon is sent to live with her estranged grandfather on Ossuary Isle, deep in the southern swamps. Joined by her grandfather’s pet raccoon Missy, Aurora explores the fog-covered island of graves. Along the way she meets its sinister residents who care for the tombstones and mausoleums, living out their lives by the strange rules of Hoodoo magic. When ghostly things start happening out in the swamp and island residents start disappearing, Aurora thrusts herself into the middle of the mystery, uncovering secrets that might be better left buried."

Brilliant Southern Gothic tale of the paranormal that centres on Hoodoo.  Set in the swamps of Louisiana, this is a dark, creepy ghost story that had me hooked from the beginning.  Gorgeous artwork done in a cold palette of blues, greens and browns while the figures' bodies are drawn slightly askew, not quite realistic; both of which add to the atmosphere and mood.  Aurora is a compelling character as she is at first dismayed by her creepy new surroundings and grandfather but it doesn't take her long to fit right in to this place where she obviously has a genealogical connection.  Her little sidekick, the precocious raccoon Missy, while silent is an adorable partner. The story is spooky and quite unpredictable.  I really enjoyed this and the book ends leaving us with the feeling that we may hope to see a sequel and have another adventure of magic and mayhem with Aurora on Ossuary Isle.
Labels: 2014 Archaia Entertainment graphic novel paranormal southern gothic