21. Magi: The Labyrinth of Magic, Vol. 3 by Shinobu Ohtaka 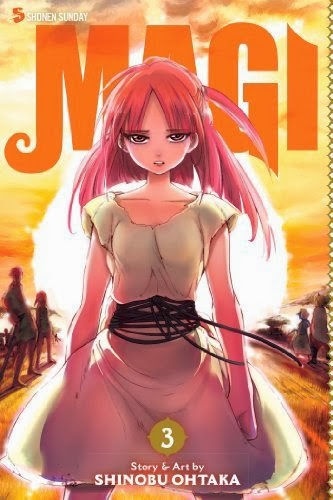 "Aladdin finds himself among the Kouga tribe, who live deep in the desert far from Qishan. An emissary from the Kou Empire arrives offering peace, but when it turns out to be an offer they can't refuse, things take a turn for the worse. Aladdin learns more about the legend of the Magi and the Rukh, bird-like beings of light, with whom he appears to share a deep connection...."

I loved this volume as it has a nice change of pace and place so soon into the series that I'm excited now Aladdin is on his way back home by the end.  First, it does bug me that Magi is not keeping "Character/Story So Far" opening pages.  I treasure those introductions as they quickly remind me exactly where we last left off and who is who! So just a bit of confusion for me as I adjust to where and how Aladdin is where he is.  This new Mongolian-type world was interesting and a war was on the verge of being fought.  Aladdin learns ever so much about himself, the Djinns, the Magi and the Rukh.  We go back into Aladdin's past and learn more about him from that and we are given a glimpse of another Magi and what he does.  But rather than go meet this other Magi Aladdin decides to go back home to find Alibaba because he thinks he knows what is expected of him.  However, the last chapters switch back to the slave girl met in book 1 and the dire situation she finds herself in now.  Lots of action, battle, plot, characterization and intrigue to keep you excited for the next volume.
Labels: 2013 4* fantasy manga shounen viz media