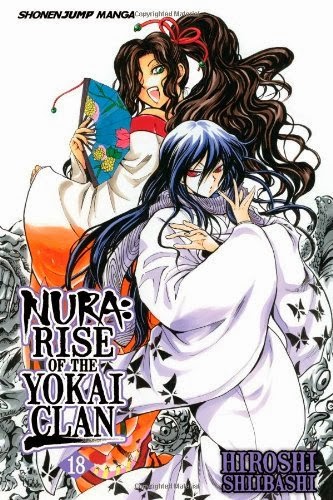 The Golden Age of Edo by Hiroshi Shiibashi  (buy)
Nura: Rise of the Yokai Clan (Vol. 18)

"Harken back with us to the Golden Age of Edo, when Rikuo’s father Rihan first takes control of the Nura clan. Gain new perspectives on Rikuo’s family history, as well as the backstory on some of your favorite devilish yokai (including that pesky Demon Lord Gorozaemon Sanmoto). Follow Rihan’s second-heir adventures as he learns the hard way that controlling, commanding and battling yokai is not to be taken lightly, lest you be the one who's taken."

This series has always been good but the last few volumes and the current story arc are awesome!  I love the Hundred Stories Clan; they are the best bad guys yet!  This volume takes us into the past and tells us a tale of Rikuo's father, Rihan, and his dealings with the 100 Stories Clan.  Some pretty awesome stuff going on here.  It's weird how Rikuo is so serious when he has such prankster jerks for a father and grandfather though.  I've never liked Rihan from his appearances so far but by the end of this he grew on me a bit.  Aaaand ... Aotaba is back!  He's just a minor little character but he's one of my favourite Yokais.
Labels: 2013 5* manga paranormal shounen viz media