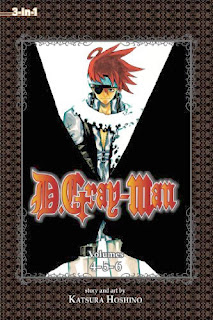 "Allen questions whether he is willing to fight the Clan of Noah—after all, he signed up to kill akuma, not humans! With his left eye injured, he can no longer tell akuma from humans, making him a target for attack. Despite this weakness, he is sent by the Black Ministry to find and protect his master, General Cross."

Vol. 4: Lavi and Allen's main mission here is to protect a village from a vampire, but something isn't what it seems.  Some cool new characters are introduced but we're left not knowing quite where everyone stands and a major fight is about to erupt.  keeps the plot and action rolling but a bit messy plotwise. (3/5)

Vol. 5: Again I'm finding the plot a bit all over the place but I'm certainly enjoying the characters in this manga.  The vampire episode is finished off on the first half of this volume and has a very interesting conclusion!  The second half brings back the Earl and a new charismatic bad guy then we get into some plotting that jumps around  and I found hard to follow but there is some great art here and some cool disturbing images.  I'm enjoying the read but it isn't a page-turner for me.  I'm really glad to be reading this as a 3-in-1 as I don't know if single volumes would have held my interest as much.  (3/5)

Vol. 6:  I think the art in this series is amazing.  Not the people, but the backgrounds, creatures and the artists use of shading is beautiful.  This volume flies into action and keeps up non-stop throughout the whole book.  The story revolves around a character (we don't know) but is an old friend of the others who has betrayed the Innocence and is being destroyed.  Our main characters are out to save him.  Then the book ends on a cliffhanger note as Allen meets up with the bad guy from the last volume, Tyki Mikk.  (3/5)

I'm going to admit that I find this story somewhat hard to follow the overall plot.  My 13yo loves it, though!  When I asked him if he liked D.Gray-Man he said "Yes! It is so intense!"  So I got him to explain to me what was the main idea going on here after I'd finished this book.  LOL.  Still not a page-turner for me, but this last cliffhanger has me interested and a bit freaked to get on with the next volume.
Labels: 2013 3* manga paranormal shounen viz media