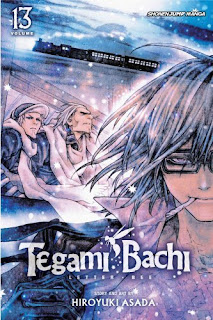 "While Lag and his fellow Bees fight a desperate battle against the Gaichuu Cabernet, the dark secrets of Amberground come to light. What unspeakable things did Garrard, director of the Beehive, see in Amberground’s capital? And why has former director Largo Lloyd joined the rebel organization Reverse? The answers lie in the top-secret district called Kagerou…"

OMG! Wow, oh wow, wow! Stunning volume full of secrets revealed as the battle with Gaichuu Cabernet continues.  What is so great is that this volume is so action packed with epic moments that it doesn't spend much time mulling over what is being revealed.  It just hits you in the face for you to think about and I can't wait for the next volume.  Not giving anything plot points away but you'll hardly believe it can be so exciting when the main characters for this volume are "old guys" Largo Lloyd, Garrard and Hazel. No Gauche and Lag is barely seen!  Out of all the volumes so far this one gets 6 stars.
Labels: 2013 5* fantasy manga science fiction viz media YA