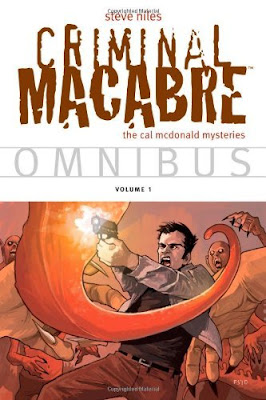 "In 2003 Steve Niles, creator of the 30 Days of Night comics series, launched a series of occult detective stories featuring the monstrously hard-boiled Cal McDonald. A pill-popping alcoholic reprobate, Cal is the only line of defense between Los Angeles and a growing horde of zombies, vampires, possessed muscle cars, mad scientists, werewolves, and much more weirdness!


Purchased a new copy from an online retailer.

1. Criminal Macabre: A Cal McDonald Mystery - The first Cal McDonald graphic novel but chronologically it takes place after the first text novel, "Savage Membrane", as he is already in LA and it mentions how he moved there from DC.  His girlfriend Sabrina is mentioned in passing but his female interest is a skeptic cop. Cal finds a vampire, werewolf and zombie at a meeting together which is strange since the three never mix and after several irregular attacks by said creatures he sets off to find out why they seem to be working together.  He finds a mastermind behind a plot to create super-creatures to take over the world.  A great first story and introduction to the monster hunter.  Templesmith's art really suits the atmosphere and I like it but admittedly it is hard at times to make out exactly what is going on since it is so dark and ethereal but by the end of the story I was really into it.  A great creepy beginning to this book. (4/5)

2. A Letter from B.S. - Very short piece in which Cal gets a letter from a dead guy and intrigued, he goes to meet him and ends up doing him a favour.  Rather out of character for Cal but he gets a stash of weapons out of the deed so worth it in the end.  OK.  (3/5)

3. Love Me Tenderloin - This is a one-shot and a great Cal McDonald case of a ghost animating meat in a beef factory and as Cal puts it "She meant so much to you that you wouldn't die. Wow. If I was a big p*ssy that would be real touching." Great story, fairly gross.  Shows Cal's "sentimental side and the relationship between him and the Lieutenant is becoming more of a partnership with her less skeptical now with all she's seen.  (5/5)

4. Last Train to Deadsville - First story with art by Kelley Jones which is much more stylized and preferable but it is a big jolt going from the dark, murky previous work to this.  A demon possessed young man arrives at Cal's for help.  Turns out he's been reading spells out of a book at the library and unleashed a succubus on his small town.  Cal & Mo go to help but don't find out the succubus part until it's too late.  Cal's girlfriend Sabrina turns up for the first time in this story and takes an active part by following them.  Fun story.  (4/5)

5. Supernatural Freak Machine - If you've read the stories, you'll know who Dr. Polynice is.  Cal has met up with him a few times before and presumably this story takes place after them as it mentions the "last" time Cal met up with Polynice.  Also chronologically this story takes place immediately after "Last Train..." as it refers to events from it as just having happened.  This is the best story in the whole collection.  It's a bit of a two-parter, first starting off with Cal getting his haunted car which would make this his 2nd one, since he had one (though different) in the stories as well.  Then comes the Polynice story which is extremely creepy and we get to see the emotional side of Cal.  A big stunning end leaves things in quite a different state and Cal's world is going to be a bit different when we next see him in Omnibus 2.  (5/5)
Labels: 2011 4* crime dark horse horror paranormal