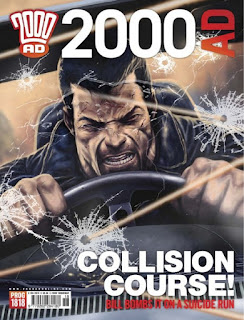 Judge Dredd: Witch's Promise - Silly story about witches and Dredd being helped by a witch's broom (3/5)

Savage, Book 8: Rise Like Lions, Part 7 - The Volg blockhouse is finally taken out and now we're waiting for the Hammersteins to arrive.  This continues to show the "good guys", Savage & co. as being quite merciless and the "bad guys", the Volgs, as having compassionate feelings.  (4/5)

Ampney Crucis Investigates: The Entropy Tango, Part Seven - The espionage continues as they look into the robot's skull and find it's been fitted with the latest Martian technology.  After feeding its input into the giant computers a virus starts running rampant and we end on a devastating note.  Enjoying this extremely. (5/5)

The Red Seas: Fire Across the Deep, Part 7 - The battle continues, the devil continues to win. (3/5)

Strontium Dog, Part Seven: Life and Death of Johnny Alpha, Chapter Three: Mutant Spring - The battle continues on the mutant city but the army comes in with a spacecraft and announces that Johnny is not their friend, if they give him up no one will be hurt, but if they don't then everyone: man, woman & child, will be crushed. (4/5) 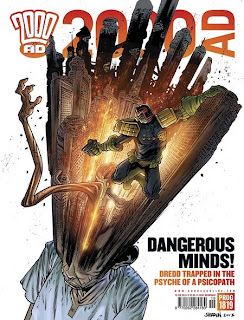 Judge Dredd: Save Him - Seeing Rob Williams wrote this one I was looking forward to a strange story.  No disappointment!  Dredd is yanked inside the mind of a catatonic psi-cadet.  Great story!  (5/5)

Savage, Book 8: Rise Like Lions, Part 8-The Hammerstein's ethical programming screws up the attack and they end up surrendering.  After hearing the news Savage's team is attacked again. (4/5)

Ampney Crucis Investigates: The Entropy Tango, Part Eight - Intrigue continues!  Crucis's wife seems to have got herself in some trouble and there is question as to whether Ampney's father is dead after all.  Loving this one!  (5/5)

Strontium Dog, Part Eight: Life and Death of Johnny Alpha, Chapter Three: Mutant Spring - Things are getting way too deep to keep getting into the story but a ceasefire brings lots of things to a head and then fighting begins once more. (5/5) 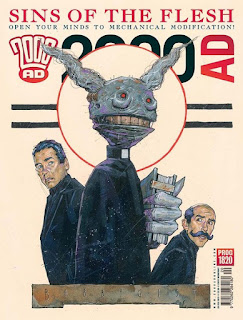 Judge Dredd: Wolves, Part One- Violence against citizens of Sov. ancestry is up 800%.  We meet 2 ex-sov men who have been citizens of Mega City One for 20 years though they have never known each other til now.  A good set up for a story.  I enjoy the soviet story lines. (5/5)

Savage, Book 8: Rise Like Lions, Part 9 - Last episode we met the female leader of the resistance, a nasty piece of work named Rusty.  She visits Savage and tells him they don't trust him any more and he's betrayed them as they think he's in cahoots with the president of the USA. (4/ 5)

Ampney Crucis Investigates: The Entropy Tango, Part Nine - It isn't made clear but Ampney and team come upon a Babbagist meeting of a religious sort that seems to be a melding their minds.  It ends on a tense note.  (5/5)

The Red Seas: Fire Across the Deep, Part 9 - So the boys attack the devil with spears.  Is he really dead?  No. He turns into a giant beast thing and the fight continues. (3/5)

Strontium Dog, Part Nine: Life and Death of Johnny Alpha, Chapter Three: Mutant Spring - Johnny is cornered and has to surrender.  This is when the demon comes back out to play and brings a double whammy to this episode which ends on a positive note for the mutants.  Loved it!  (5/5) 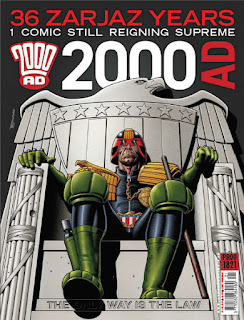 Judge Dredd: Wolves, Part Two - So the Sovs have been rounded up into internment camps for their own safety while violence continues on the outside, lynchings, attacks etc.  The chief judge has been talking to the ambassador and seems east meg two will supply 5 million tons of food to meg city one in exchange for deportation of all its sov. citizens.  Doesn't sound good to me! (5/5)

Savage, Book 8: Rise Like Lions, Part 10 - The Volgans' and the "Beefheads'" (the English), the soldiers in combat are beginning to realize that it is the Americans who are the true enemy here, especially President Quartz. More sniper attacks. (5/5)

Ampney Crucis Investigates: The Entropy Tango, Part Ten - In the middle of a fight with the Baba-whatever they're called, Ampney meets his dead father who tells him he's safe now.  And I see dinosaurs in the background!?  Intriguing!! (5/5)

The Red Seas: Fire Across the Deep, Part 10 - Fighting with the devil continues and the captain is at a loss them some of his dead companions finally regenerate and come back but with them appear to be the Viking Gods. I see Thor and what is probably Odin and Frigg.  (4/5)

Strontium Dog, Part Ten: Life and Death of Johnny Alpha, Chapter Three: Mutant Spring - Oh, Man!  This is the end of Chapter Three.  The mutants have won the battle but not the war.  They were betrayed and I think there will be a power struggle with Johnny and Kid Knee.  The concluding series will be called "The Resurrection Saga" and is "Coming Soon'.  So who knows when that will be!  (5/5)
Labels: 2000AD 2013 anthology comic book science fiction short stories