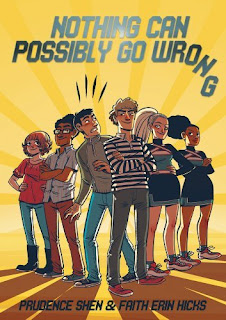 Nothing Can Possibly Go Wrong by Prudence Shen. Illustrated by Faith Erin Hicks

"You wouldn’t expect Nate and Charlie to be friends. Charlie’s the laid-back captain of the basketball team, and Nate is the neurotic, scheming president of the robotics club. But they are friends, however unlikely—until Nate declares war on the cheerleaders. At stake is funding that will either cover a robotics competition or new cheerleading uniforms—but not both.

It's only going to get worse: after both parties are stripped of their funding on grounds of abominable misbehavior, Nate enrolls the club's robot in a battlebot competition in a desperate bid for prize money. Bad sportsmanship? Sure. Chainsaws? Why not. Running away from home on Thanksgiving to illicitly enter a televised robot death match? Of course!

Absolutely wonderful high school story.  One of the most refreshing school stories I've read lately.  Manages to take a genuine, real look at high school life and issues without resorting to s*xual topics at all.  Bravo, Ms Shen!  The story of Nerds vs Cheerleaders with a misplaced Jock stuck between is hilarious making a deliciously fun story.  At the same time, we are given a much more serious look at one character's problematic home life with divorced parents, a never-home dad and a mom living far away with a new boyfriend, neither ever having time to be a parent.  I loved the characters!  While they are wildly stereotypical, on purpose, to make the story so much fun Shen & Hicks bring out their personalities so that I just loved every one of them, well not Holly.  It was so cute when you see (I'm not going to say who!) holding hands at the end.  While I'm not a fan of everything having to be part of a series, it sure would be great to see this group of teens together again maybe focusing on a different character's private life.
Labels: 2013 5* canadian illustrator coming of age first second books humour realistic fiction YA