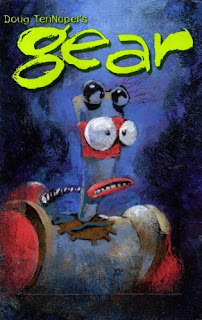 "Four incompetent cats high-jack a Giant Killer Robot! The plans are made, the cats lay in wait, the Robot comes and everything goes el stinko. This book's got everything: robots, harpoon guns, talking cats, gun shots to the head - the whole sha-bang!"


Borrowed a copy through Inter-Library Loan.

First, I'll just say this book is *not* for children because of what I guess the industry would say "disturbing images": the first page has a guy being shot in the head execution style, later someone's neck is bloodily sliced, and so on.  This is a hard book to review, I wasn't quite sure what to make of it.  I guess I'll work it out as I write about it.  I really liked it but ... it is pretty weird.  The day after I read it, I felt better about it than when I had just completed it, though the ending was completely satisfying.  So I picked it up again and didn't quite re-read the whole thing but browsed through the book reading certain scenes, pages and sections while looking at the art.  It grows on you and more understanding came to me.  The story certainly does have allegorical meaning which I appreciate as a Christian even though it is very strange.  I was first alerted to this when a character calls on Jesus, not blaspheming, but actually calling on the Lord for help.  This made me open to any symbolism and I got the connection of Gear being a Christ-like figure. While I'll still plead to some plot confusion, such as what that first scene has to do with anything, I was utterly taken in with both the art and the characters.

Originally published in 1998 as b/w, this re-issued coloured edition is fantastic.  Honestly I just can't imagine TenNapel *not* in colour as his work is so big and bold and would simply cry out for colour in my opinion.  Done with a Japanese brush and ink, this is not TenNapel's stylized form we are used to from his most recent work but something much more wilder with an abandon to it which I am very attracted to artistically.  I fell in love with the characters, especially Waffle and the other two cats but I also loved the self-sacrificing Gear and the insectoid Chee.  I am going to continue reading TenNapel's backlist; he is a surprising artist, with a penchant for the strange and creepy but tells an eloquent story.
Labels: 1998 2007 4* christian image comics robots