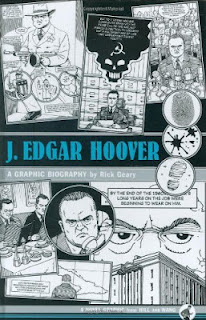 "A True History of Violence (and Crimefighting, Politics, and Power)

In the hands of gifted cartoonist Rick Geary, J. Edgar Hoover’s life becomes a timely and pointed guide to eight presidents—from Calvin Coolidge to Richard Nixon—and everything from Prohibition to cold war espionage. From a nascent FBI’s headlinegrabbing tracking down of Dillinger and Machine Gun Kelly in the 1930s to Hoover’s increasingly paranoid post-WWII authorizing of illegal wiretaps, blackmail, and circumvention of Supreme Court decisions, J. Edgar Hoover: A Graphic Biography provides a special window into the life of an outsized American and a bird’seye view on the twentieth century."

As usual Geary's illustrations are a perfect match for his text and so detailed one can just look into them for ages.  I thoroughly enjoy just looking at Rick Geary's work.  I'm quite well read on Hoover and this brought nothing new to the table for me.  This is a whirlwind basic biography through his 80 years of life and near 60 of those in the Federal bureaucracy business eventually starting an agency that would go on to be called the  FBI, where he became the Director unofficially "for life".  From the end of WWI to his death in 1972, Hoover saw tremendous events occurring throughout the 20th century and would play a major part in them.  Sometimes on the side of good and right, others on the side of the fanatical tyrant.  From Geary's other work I've come to know him as an author who can write an unbiased biography and he has succeeded very well here and Hoover is a very controversial subject.  Hoover was a man of his times and place , a man of unflinching morals, a man whose biggest thrill was power and a man who has been surrounded by rumour his whole life but especially since his death and can no longer defend himself.  However Geary sticks to the facts in these cases, no proof of any rumour about Hoover has ever been given even a shred of evidence and Geary doesn't lead us on.  My only problem with this book is that it is so short that we don't get to ponder the various actions/events Hoover was involved in as they are presented so quickly to try and cover as much territory as possible but of course some things do, in the end, get left out.  A good piece though mostly to get an overview of Hoover as a starting point or a quick refresher.  The book is factual and the art is stupendous.
Labels: 2008 4* biography Communism Hill and Wang history true crime