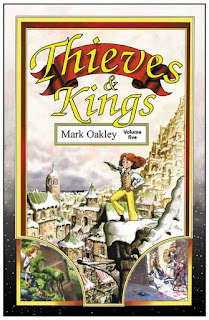 "The fifth volume of Thieves & Kings collects nine issues of the original comic book series, following the story of a small band of young and powerful companions. During troubled times in the depths of a cold winter, Heath Wingwhit and the thief Rubel, -and their new witch friend recently escaped from the dark palace, must together survive the streets of Oceansend even as the Witch Queen plots to destroy them. . ."


Oh, this series just gets better and better. The plot has developed into an intricate, many layered story with reveals that are just purely epic and rewarding in this volume.   I won't say much about actual plot here so I don't give anything away; I'll stick to talking about the characters.  Quinton comes back to the forefront here to a certain degree but it is the female characters who are deeply front and center.  My absolute favourite characters at this point are Kim and Soracia.  Soracia has been so mysterious throughout and now we are finally learning things that have only been hinted at previously and her character has grown into so much more than she was when we first met her as the Shadow Queen.  The same can be said for the growth of all the female characters as they come upon their real identities and come into their true potential for magic.  As the volume winds to the end it hits a fever pitch with an epic battle, reveals about characters and an interesting cliffhanger.  I am absolutely dying to read the next, and last, volume.
Labels: 2004 5* canadian author fantasy graphic novel I Box YA