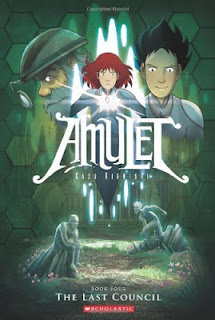 "Emily, Navin, and the crew arrive in the lost city of Cielis, but they soon realize it is not the utopia they expected to find. While Trellis and Luger are taken prisoner, Emily is forced to fight for her life in a series of tests that will determine who among the new generation of young Stonekeepers will join the Guardian Council, the powerful group of Stonekeepers who govern Alledia. As the number of competitors gets smaller and smaller, a terrible secret is slowly uncovered - a secret that will change the lives of our heroes forever."


Purchased a new coy from an online retailer.

Wonderful series that I've got a little behind on.  Since it's been some time since I read the last book, I was a little foggy on the story details but they came back to me as I read and brief references to previous events helped to jog my memory.  So overall, not hard to get back into the groove of things.  Kibuishi's art is gorgeous as ever: somewhat cartoonish with a hint of a manga-feel about it.  The sequential art is quite like watching a movie frame by frame.  The plot advances along here, not as exciting as last time, but finally some background on the origins of the story while the present focus is all action in a "Hunger Games" type of way. 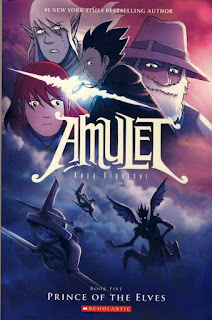 Prince of the Elves by Kazu Kibuishi
Amulet, Book 5

"Emily has survived the chaos of the Guardian Academy, but Max Griffin, who is working for the Elf King, has escaped with the Mother Stone. The Elf King has now forged new amulets, which will allow him the ability to invade Cielis and destroy it once and for all.

Emily and her friends desperately make preparations to defend Cielis in what will inevitably be a brutal war, and they can only hope that it will be enough to defeat the Elf King."


Purchased a new copy from an online retailer.

At this point it is getting difficult to review this series without giving away any more spoilers than publisher already does, so I'll keep this brief.  The series continues to delight and by this book the world building has become quite detailed.  Answers to questions are finally being answered and some resolution to plot points are made in this volume (though they only raise more questions!).  I'm loving this series as an adult but it doesn't quite hit spellbinding or page turning for me so keeps at a solid four stars for me.  Kibuishi's artwork continues to be astounding matching the emotions of the plot.  Quite an intense ending with this volume leaves me waiting for the next one.
Labels: 2011 2012 4* fantasy graphic novel graphix MG scholastic