Superman Action Comics, Vol. 1: Superman and the Men of Steel by Grant Morrison 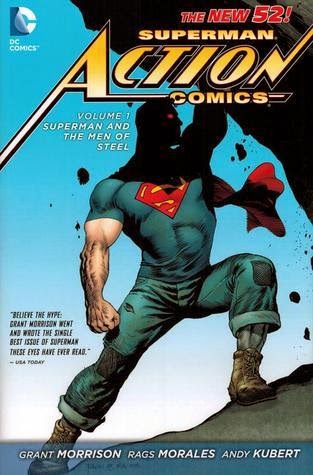 Action Comics, Vol. 1: Superman and the Men of Steel by Grant Morrison
My rating: 4 of 5 stars

Other than loving Smallville, I'm not the Superman type, being more of a Batman girl but I couldn't pass up purchasing this when the eBook was on sale for $2.99. First of all, this is a lot of bang for your buck with 8 issues collected here when you can expect the usual trade to have 5, maybe 6, issues. This volume is all pretty much background story and there are new ideas put into the Superman story that I quite liked. The majority of the book centres around the title story which features Braniac and Earth being almost miniaturized like Superman's home planet. Superman starts off with his cape, a T-Shirt and jeans, and wow! is that ever a sexy look! I wish he stayed like it; it's too bad when he puts on his tights and gets his real costume :-( In this new universe Lex Luthor is a scientist, which was a little disconcerting at first but I think it could prove an interesting character development. The next part of the story was a little confusing as it went back and forth from the future to the past, something I just don't like about Superman's world anyway. I loved the short stories at the end, though, especially those featuring Steel. Overall, I thought the art was very good and since I'm a regular reader of Justice League it was good getting a closer look at Supe, but I wouldn't purchase this title again unless a really cheap deal came up again on a Kindle edition, then I probably wouldn't be able to pass it up.