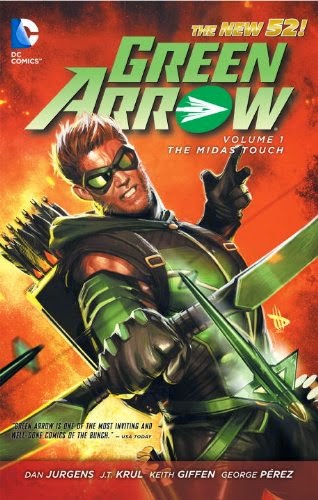 Another Justice League member I don't know all that much about but I picked this up when the $1.99 ebook sale was on. I'm really excited about Jeff Lemire taking over this series now with Vol. 4 so am going back to get a take on him up to date. This was ok. I kind of like Green Arrow in that he's Batman-like, with his vigilante ways, no superhuman abilities and secret identity of a millionaire mogul playboy. This volume has the GA battling against two villainous teams in separate one-off stories. Most of the book has him being hunted and then trapped by a group of super-villains who battle him live online. Then a strange duo of lovers have it out for Oliver not knowing he is the Arrow. Both of these stories are wrapped up though the villains are still available to show up in the future. I liked the occasional references to the JL and a few of the team superheroes as in that series (which I read regularly) GA eventually turns up wanting to join them.