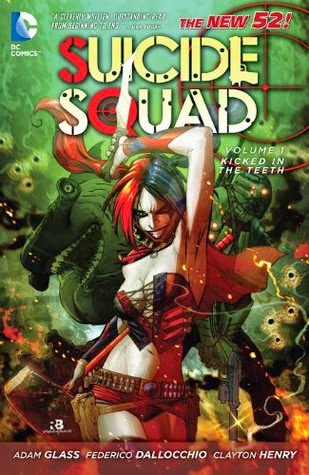 I have been pretty eager to read this one since way back when I first started the New 52 as the SS or Amanda Waller would pop up here and there in the other series I was reading and I didn't have a clue who she/they were. I absolutely loved this!! It was really creepy and with a team of bad guys has stuff going on that you just don't normally find in a superteam book. I must say I am fond of team-ups but since I didn't really know any of these guys except for Harley Quinn as she's appeared in the Batman books I've read to date I wasn't sure how they'd go over with me. It was a bit tough getting used to who was who at first but characters started to stand out and by the end of the book major players are certainly prominent in my mind now. What's pretty cool, but disconcerting also, is that being villains under threat of death for not complying you never know when a team member is going to end up dead and that really changes the dynamics of a read compared to you're usual superhero team when you know everybody is going to be okay unless word gets out somebody "major" is going to die! These guys are viscous though and I have a like/hate feeling for them. The King Shark/Yo-Yo thing really creeped me out!! Harley certainly comes out on top as the main character here and I'm so thrilled to get her complete backstory presented here with her romance with Joker and change into Harley. Also glad to have the extra bits of the Joker's face story added to that whole arc, which I've read, but these little details were missing. Now to find out just exactly how Joker gets his face back, what is up with this Basilisk group and who will comprise the Suicide Squad on the next mission. I purchased the ebook of this when the $1.99 sale was on but I'm fully prepared to continue to buy this series. I think I could possibly like it along the lines of JLD. I guess I like the dark themes and plots!