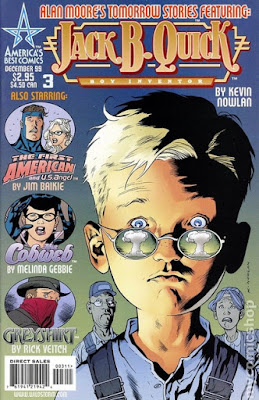 1. Jack B. Quick, Boy Inventor: Pet Theory (Kevin Nowland) - Jack is always experimenting and after just recovering from a nuclear strike on their neighbour's farm he gets a cat. He manages to get his cat to fly but he takes off and his experiment to clone the cat ends up with way more cats than needed. Luckily while the pigs at the neighbour's farm turn all "Animal Farm" on everybody Jack's cloned cats save the day. Totally insane! (3/5)

2. The Cobweb: Eurydice, A Retrospective (Melinda Gebbie) - This isn't a comic but rather a short story. A flowery, over-written story of the Cobweb rescuing a woman from the sewers and mobsters. Very melodramatic. however, the art is stunning! (3/5)

3. The First American and U.S. Angel: The Peril of the Pediatric Perpetrators (Jim Baikie) - This is just an absolute farce and downright silly. Obviously intended as humour but still, silly. (2/5)

4. Greyshirt: The Making of (Rick Veitch) - This is the origin story for Greyshirt, a man who once was a crook and now treads between the law and larceny. Looks like the first appearance of a new regular serial for the anthology. (3/4)