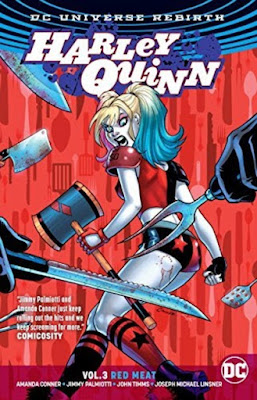 I did not care for the first two volumes in this series but this third one redeems itself for me. I had a lot of fun reading this and the Harley that is being written for this volume is much more like her normal self. The accent is still there but toned way down, especially since vol. 2. Some major arcs running through and carrying off the plot. The mayor makes a deal with the devil (so to say) and finds a solution to his homeless and vagrant population. When one of Harley's homeless friends goes missing she finds herself fighting cannibalistic (I'm not sure if they are) aliens. Next major arc involves Harley Sinn being let go from Arkham for an assignment and she meets up with Harley. Lastly, a person from the 31st century who worships the slain Batman is sent back in time to deal with his killer, Harley Quinn! A good read but this series is certainly being written outside of the current "Rebirth" canon, which does bug me.