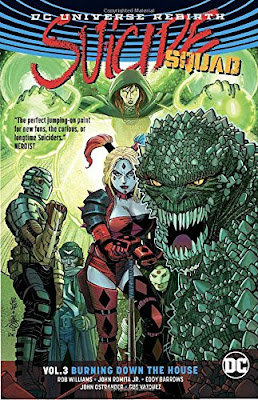 Suicide Squad (Rebirth) Volume 3: Burning Down The House by Rob Williams
My rating: 5 of 5 stars

Fantastic! A total shake-up of the Suicide Squad as we know it. Characters die here, folks (and, yes, that is plural!) The current gang meets up with two different teams of super-heroes/-villains: Strikeforce Europa and The Burning World. I love teams because there are so many characters and this volume brings back some old lesser-knowns and some totally new ones. Harley is at her crazy best here. I really like how Rob Williams is writing her character. With the end of the title story of this volume, it will be very interesting to see how the Suicide Squad works after this. The final issue in this volume is a one-shot which doesn't entirely follow the events of the main story making it a little strange to be placed at the end.