I had a blast reading my collection of books in this story arc! Each book is listed below in reading order, with the ones I've read reviewed. 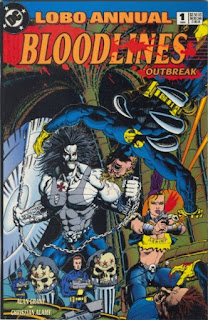 Oh boy, that was about the most psychedelic DC comic I've ever read! I'm not really acquainted with Lobo, even though I did read one "New 52" featuring him. But this guy here, this Lobo?! A total nutjob. Everybody looks like early '90s punks and the art is an eyesore featuring mostly purples and greens. This is one weird group of anti? semi? superheroes? The story, on the other hand, is intriguing. Bloodlines is an arc that ran through the DC universe in 1993. It is comprised of many superheroes annuals and a few single issues. I don't have the complete set but I do have a small  pile. The Lobo Annual is the first book in the Bloodlines series and introduces us to the aliens who have entered Earth's solar system. They are big rather "Alien"-ish looking, fierce with a taste for human "juices".

Superman: The Man of Steel Annual #2

Batman: Shadow of The Bat Annual #1 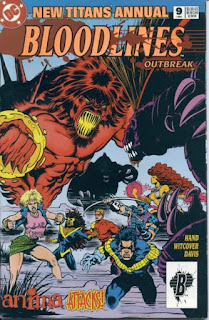 The New Titans Annual #9 by Elizabeth Hand
My rating: 4 of 5 stars

This is book 5 in the Bloodlines saga. Having only read volume 1 I was a bit wary of having skipped over the other books. However, this was unnecessary as the book reads like a standalone. The book starts with a Voodoo cult who is taken control of by two of the alien beings who arrived in volume 1, both of whom we met before. Then on to the New Titans who have been given the case of all these blood sucking deaths. I loved this crew, not having read a '90s version before. I knew all the members but didn't recognize them by look alone. The art is very psychedelic with an infusion of every bright colour possible. I don't think I'm a fan of the artwork from this period. The story was excellent though and I enjoyed getting to know this version of the New Titans. The story here is self-contained and ends with a complete ending as far as the Titans are concerned but the aliens are ready to go bother someone else. 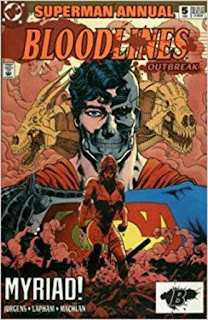 Superman Annual #5 by Dan Jurgens
My rating: 5 of 5 stars

This is only very loosely tied to the Bloodlines series, and yet may possibly be a pivotal one in the story arc. The aliens are on the first few pages, sucking fluid from human spines but then one of them finds a dead body and sucks her juices. Then the aliens are gone for the rest of the book. However, the dead body turns into a new villain, Myriad, who upon contact takes the personality and memories of that person. After her first try at this, she realises she has to kill the person so she can fully assimilate them into herself. The art is great! Much better than the other '90s art I've been experiencing lately. The book also takes place during '93s "Death of Superman" storyline so Superman is actually not even in his own annual but instead the Cyborg Superman is taking his place. 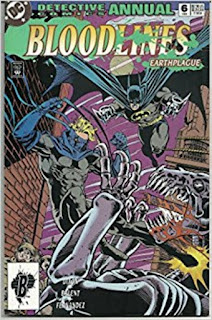 Detective Comics Annual #6 by Chuck Dixon
My rating: 5 of 5 stars

Wow. That was a satisfying and quick read. It held my attention from the get-go even though this DC era is so different for me. First, I've jumped into the 5th book in the second story arc of Bloodlines, Earthplague. The story of the aliens is easy to pick up as they are still just roaming around causing trouble and sucking the spinal fluid out of humans. There's one alien in this and it's one who's been around since the very first book, Lobo. At the same time, it is a story about a guy new to the superhero business, one who's only been in the gig for a year. Batman. Yes, Batman! When in the world did this Jean Paul Valley become Batman?? Where is Bruce Wayne? I actually liked Valley as Batman but this totally shocked me and after reading the books I have in this series I'm going to have to go back and find some reading to do from this period of DC, the early '90s. 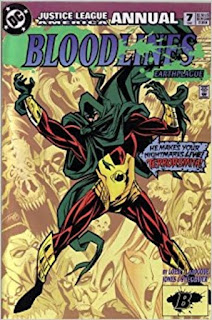 Another great issue in this series. This time the aliens are a big part of the story but much more so is a man who gets turned into one of the Newbloods. He changes appearance totally and quickly discovers that when he touches someone they turn into a monster of themselves. This guy already had a chip on his shoulder against the world and now he can do something about it, calling himself Terrorsmith. So the JLA are called in and spend their time tracking down this guy while at the same time going after the aliens. This 90s JLA was very unfamiliar to me and I found it interesting. Booster Gold was the main character, while Wonder Woman was the most known. A great story and the art isn't too shabby either except it has a lot of red and yellow making it quite bright. I have the next one in the series coming up and am looking forward to it. 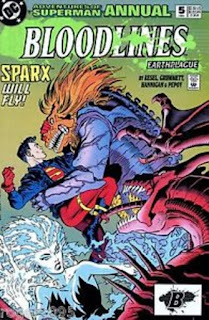 Adventures of Superman Annual #5 by Karl Kesel
My rating: 4 of 5 stars

This is the next issue in the series coming right after JLA. Another action-packed issue making for a very fast read. Now, remember that Superman is "dead" at this time in 1993 so Supe is not in his own annual. This time we have a young man, a boy, being called in to be Superman. He is never referred to by any name other than Superman so I didn't know who he actually is; I just thought of him as Superboy, whoever that was in '93. This issue brings the story back to being heavily plotted around the aliens and we finally get to know what their ultimate plan is. By my count 5 of the 6 aliens were in this book. I'm really enjoying this story arc and would like to get the rest of the books someday. I'm now moving onto the 3rd story arc and own two more issues to read. 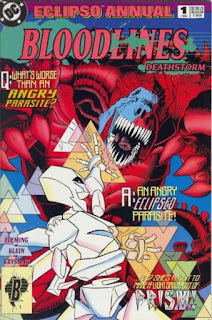 Eclipso Annual #1 by Robert Loren Fleming
My rating: 5 of 5 stars

I'm jumping into the 3rd volume (Deathstorm) of this series with issue two. Every book in this series just gets better and better! Or at least just as good, and to think it all started with a crazy Lobo annual. :-) Mostly just more of the same here. I've never heard of Eclipso before and was surprised to find out that he was a villain. Prism is the Newblood created in this issue and for the first time (at least in the issues I've read) we meet with the other Newbloods from previous issues who have banded together to get the alien who created them all. This was great fun meeting up with them all again after having had them just walk off into the sunset in their own story issues. Fantastic fight at the end between Newblood Prism and Eclipso. The end of the book notes that the new superheroes (Newbloods) will be returning in their own series called "Bloodbath". Will have to check into that. Now I personally own only one more issue, at this time, and will be getting to that next! 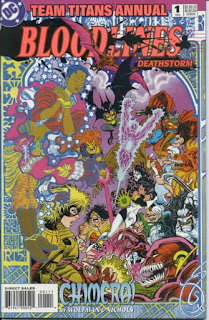 Team Titans Annual #1 by Marv Wolfman
My rating: 5 of 5 stars

I was excited when I saw this was by Marv Wolfman so went into it with great expectations even though I had never heard of this team or any of the heroes. First, I must say I really liked the graphic design of this book. The text was much bigger and more blocky than usual and I found it very easy on the eyes. As you can tell from the cover the art is psychedelically out there! But it actually works very well. Totally new superheroes to me but I'd be interested in seeing more of them as they prove quite interesting. The "Bloodlines" alien plot is very low key in this issue. There are two brief appearances of aliens, however, the main plot revolves around the character who is bitten at the beginning of the book. Then the "Teamers" set out to rescue her and the story goes into detail about her new powers consuming her and causing mayhem. Though she battles them, they finally manage to calm her down and Chimera is born.