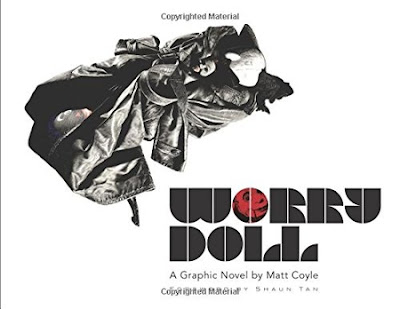 by Matt Coyle
Foreword by Shaun Tan
My rating: 3 of 5 stars

What on earth can I say about this? It is totally abstract and confusing yet the artwork compels one to continue turning the page. A very weird noir tale that may or may not be a story. The text and pictures don't seem to relate to each other and yet in the occasional word they do which made me strive for comprehension. Every other page we have short snippets of text alternating with full page bizarre and grotesque illustrations. The text is a conversation (with no quotations) between two people. The conversation seems to be with a mental patient and someone who knows him. The illustrations, however, show some dolls finding a murder scene in their home and then their journey after they leave the house. The dolls are recognisable. The first one is startling as it is a Golliwog doll and he is the main character. Next is what I identified as an old Elf on the Shelf but the acknowledgements name it as a Gerry Gee ventriloquist doll. The third doll I'm presuming is known too but I didn't recognise it, though I sensed perhaps it was a French man. The images are bizarre: a murder scene with a decapitated head, later on, a decapitated dog, the french doll without his pants and his privates clearly visible, a man stuffing himself into a suitcase. It's a gorgeous, compelling,macabre book butI could make no sense of it.