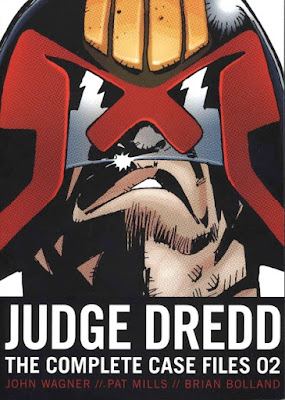 This is a fantastic volume which is made up of two epic storylines. First up is the "Cursed Earth" which I reviewed recently with the new uncensored edition. This version skips about three chapters because of copyright violations at the time. It's a great story, though. However, next up is "The Day the Law Died" classic storyline which is really a wonderful story from this time period of the late '70s. It certainly has its cheesy moments but more often than not we have a serious story of the near ruination of Mega-City 1 because of the takeover of a tyrannical new Chief Judge. His rule reminds me of the worst of the Roman Emperors and he's even depicted in some obviously Roman poses. Best of all is Brian Bolland's work off and on throughout the volume. One can tell immediately when his crisp detailed artwork shows up.