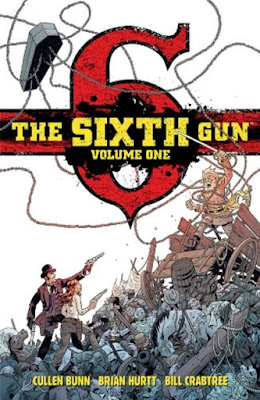 by Cullen Bunn
Illus. Brian Hurtt
My rating: 4 of 5 stars

This is an absolutely gorgeous oversized hardcover book which was a pleasure to read. I hadn't heard of this series but will now be wanting to continue. This a paranormal western with an overriding theme of six guns with special powers and when all six are put together will bring about the apocalypse. This deluxe edition contains issues 1-11 or trade volumes 1 & 2. Both volumes have individual stories while being a part of the larger whole. In volume one, the main characters battle a general who has returned from the dead and they obtain five of the guns. In the second volume, dark forces are gathering to get the guns back for their own purposes. A thief tries to steal them and an evil spirit causes death and destruction trying to get the guns. The characters are interesting. Drake is a complicated character and I'm sure we'll find he has more things hidden in his past than were revealed so far. There is a lot of fighting and different paranormal creatures (spirits, zombies, etc) but the violence while bloody is pretty tame. Ends with a prose short story.