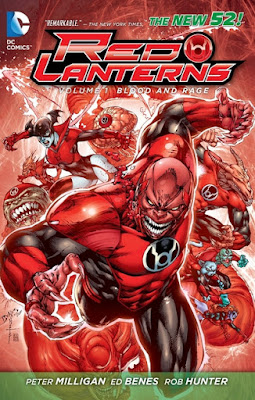 by Peter Milligan
Illus. Ed Benes
My rating: 5 of 5 stars

This was great! Totally new territory for me. Bleez was in the last book I read and there was a brief scene with Atrocitus. Now we see the results of that scene and Bleez gets her intelligence back. There are back stories on all the major players in this book letting us get to know them. The first human Red Lantern is introduced also and we get his whole origin story. The Red Lanterns are fired by rage so they are always fighting and this is an action-packed story even though it focuses on introducing the characters, Green Lantern Guy Gardner makes an appearance as well. So with three titles under my belt, I'm very interested in the Lantern universe, more than I thought I would be!