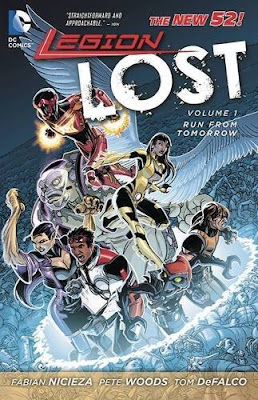 by Fabian Nicieza
Illus. Pete Woods
My rating: 4 of 5 stars

I enjoyed this one even though I hated "Legion of Super-Heroes, Vol. 1". The two books have a common thread, being that they are both about members of the LoSH and reading this one made me understand LSH better. LoSH starts with an accident and the loss (death) of some team members. This volume is the story of those members; they are not dead but stuck in the 21st century. There are seven members and we get to know them pretty well with Timber Wolf and Wildfire getting the most attention. I really liked everyone, especially Tellus, even though I hadn't heard of any of them before. The story is pretty good and gives the team a mission to solve that they've brought with them to Earth. That arc ends and the last issue deals with them getting used to the fact that they are stuck on 21st-century earth. One issue involves the inclusion of a famous DCer who I always enjoy, so that brought a bit of familiarity for me. Pretty good team effort and I'd like to meet these guys again.