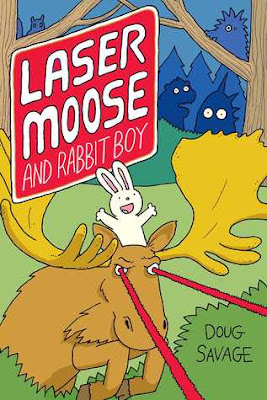 by Doug Savage
My rating: 4 of 5 stars


This is hilarious. Three short stories featuring Laser Moose who is always on the look-out for danger and Rabbit Boy who looks on the bright side of things. The stories are really cute and the humour is a little dark. Moose hears rustling behind a bush and assumes it is danger lurking so he laser blasts the bush. Oops! It was just Frank the deer foraging but now his leg has been sawn off and it's not the first time Laser Moose has done this! Later we find Frank the deer in a tree being attacked by Aquabear (who fell in a toxic swamp with a fish and turned half bear/half fish, only later he falls in again with a beehive and turns into Aqua-Bee-Bear. It's just so silly it's hilarious. The back of the book has a little edu-lesson with an experiment for kids to try. This is hilarious too. Fun!