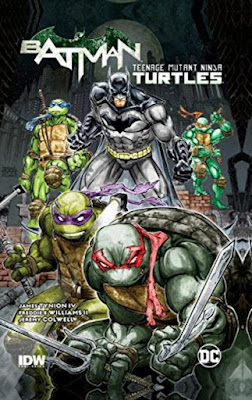 This is all pretty much what one would expect from a team-up such as this. Very campy and full of cheese (and pizza). The premise is a little far-fetched with the TMNT & Shredder being sent through a portal to another Earth dimension, namely the one that includes Gotham City. The turtles and Batman plus Robin eventually team up to fight Shredder and the Foot Can who have teamed up with Penguin and later the much more villainous Ra's al Guhl. It does mention some events from canon, namely the Zero Year and the multiversity, so it does fit in chronologically somehow. The art is quite good, everybody looks like they should but Williams did his best job on portraying the Turtles. Nothing serious but a lot of fun!