Friends Is Friends by Greg Cook 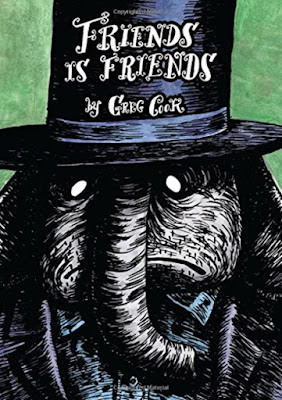 This is a series of interconnected shorts. It's rather odd and while I liked it, it really wasn't my thing. I prefer a continuous narrative. These shorts are the type of thing you find in the comics or on a webcomic. All together they do tell a tale of some pretty quirky people. We start off with the drunken elephant hobo who is befriended by a boy pig on a scooter. The pig meets a dead bear ghost and later on meets a bear in a diaper who the ghost is pretending to be. Later on, the pig's sister and mother come onto the scene. The story is about friends who aren't really very good at being friends but everything turns out all right by the end. I don't know who the intended audience is, though. Overall, it works well for kids being cute in a quirky, odd way and easy to read. However, the first few shorts have very foul language and then there is the continuous drunken drinking theme and the elephant remembers back to a lady elephant he liked but he cheated on her. Sooooo ... some adult situations make it probably not for kids.