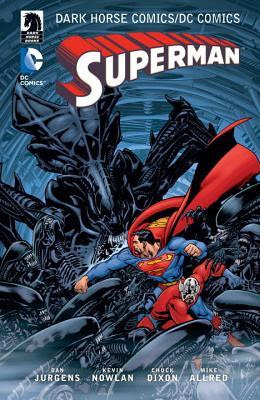 An omnibus collection of Dark Horse titles featuring Superman. Two of the four stories were terrible while the other two were a lot of fun. A mixed-bag which ends on a pleasant note saving the best for last.

1. Superman vs. Aliens by Dan Jergens (1995) - Ha, this was really good. Pretty much the plot you'd expect with Supe battling the Aliens but he goes to a city in space that has a Kryptonian heritage and is infested with the Aliens. There he meets Kara and we have a new beginning story for her (Supergirl) there. The art was laughable though because it was sooo nineties. Women in power suits, shoulder pads, man haircuts and Superman had a hairy chest! Plus his hair cut was almost a mullet! LOL! Fun story, though. (4/5)

2. Superman vs. Aliens II: God War by Chuck Dixon (2002) - This one is pretty lame simply because it is boring. Darkseid finds a crashed ship of Aliens and he breeds them to take over New Genesis. I've never read a New Genesis story before so all the gods were new to me. Superman is visiting and he helps them fight off the Aliens. There isn't much action surprisingly, they spend more time chasing than fighting. The art, however, is way better than the first story. This one ends with the possibility open for Darkseid to return with the Alien menace. (2/5)

3. The Superman/Madman Hullabaloo by Mike Allred (1997) - Oh man, this was the cheesiest thing I've read in ages! I have never heard of Madman before but Superman does a dimensional body switch with him and they end up in each other's worlds with their bodies and powers semi-switched. Madman lives in an alternate farcical sixties world. Anyway, they spend their time trying to sort things out and find that Mr Mxyzpklk is at the centre of it all. Not even funny cheese. Yick (1/5)

4. Superman/Tarzan: Sons of the Jungle by Chuck Dixon (2002) - Well, I was going to call this a pastiche but the publisher's note at the end says not to think of it as a pastiche but as a "what if" story. It's both. Imagine Kal-El's ship crashed in the middle of darkest Africa and he was raised by apes. Then we have this story here of a Tarzan-Superman who eventually meets up with John Clayton, Lois Lane and Jane Porter after they crash in an airship. It's totally out of canon but incredibly fun. I also loved the art by Meglia and Stewart. It's angular, cartoonish and wild. (5/5)