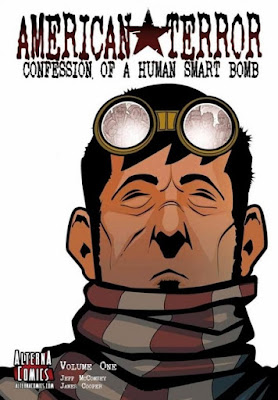 American Terror: Confessions of a Human Smart Bomb, Vol One

by Jeff McComsey
My rating: 5 of 5 stars


This is awesome and the art is really good. It's the future, Nov. 11, but Veteran's Day is no longer celebrated. Victor was in the wars that got the world to where it is now (a supposed Utopia) and he sees and talks to his dead comrades. He wants people to know of the millions who died to make the world they know and he starts telling his story. We learn his background in Kosovo ad eventual court martial. Then he's recruited by a new team that will be working corporate security as the military is no longer going to look after its civilians abroad. Pretty violent and intense! 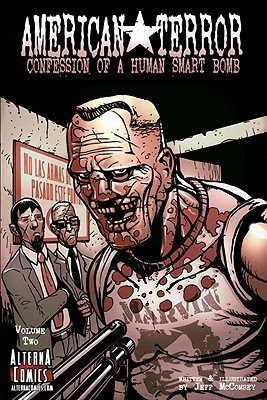 by Jeff McComsey
My rating: 4 of 5 stars

Intense read! This starts off with the action and never lets up. We're in the past now (possibly close to our current present) and there are only a few flashes to the present to remind us Victor is telling his story to a Deacon. (This confuses me a bit because Deacons can't hear confession) Back to the past, he rounds up a small base group and then they go out recruiting people to gather at a meeting where he'll tell them what it's about. He says the only thing worse than an army for hire is a person whose not. Those are who he is looking for in putting together this group of special op trained people to fight the new corporation armies. It ends with a cliffhanger and there is still no conclusion seven years later.