Past Aways: Facedown in the Timestream by Matt Kindt 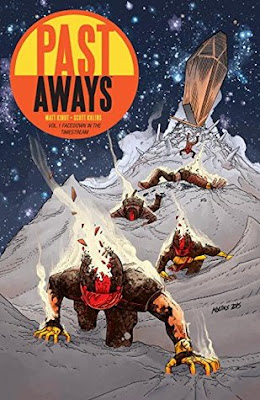 Past Aways: Facedown in the Timestream

by Matt Kindt
Illus. by Scott Kolins
My rating: 3 of 5 stars

I really like Matt Kindt but his last two books have not wowed me. This is good in the middle. It starts off right into the story and left me feeling slightly off-kilter until I could figure out just what was going on and who was who. Then the story picks up as the team has adventures trying to figure out a way to get back to their time, meanwhile character is developed making them interesting people. Past that, I kept feeling like it needed to wrap up and finish but it was just too long for the story it is presenting. It's an entertaining read and I kept with it but did find the drag making me wish it would hurry up and end. My favourite parts actually were in between issues when the documenter of the project, Herb, would write a textual entry in his journal describing a journey out to experience 21st-century life and how he compared it to what was norm for him, a million years in the future.