Sherlock Holmes and the Necronomicon by Sylvain Cordurié 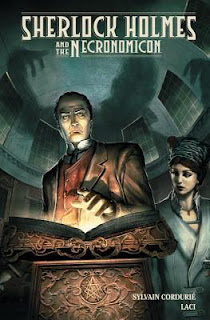 Sherlock Holmes and the Necronomicon

by Sylvain Cordurié
My rating: 3 of 5 stars

This takes place after "Vampires of London", referencing it but is not really necessary to have read that first. Holmes talks more openly about his acceptance of the paranormal throughout this comic and while I didn't buy into it in "Vampires", I was more comfortable with this new Holmes by now. This is a fun story and a mix between Indiana Jones and a Buffy plot-line than anything to be found in a real Sherlock story. Set just after the Reichenbach Falls episode, this is Holmes vs Moriarty vs the paranormal world with Queen Victoria working mysteriously behind the scenes. Outrageous camp in a "Hammer Films" horror way with great French comic book art. Fun as long as you like don't mind some cheese with your Holmes.