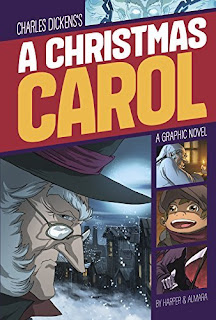 by Benjamin Harper
My rating: 4 of 5 stars

As usual with this series from Capstone, we have a fine adaptation of the original, especially for kids. At less than 70 pgs, plot elements are going to be culled here and there, however, I find Harper has done a good job of not only representing the original but deciding to shine a particular light on the theme of charity in his adaptation. The Marley sequence is good and told in detail, some graphics skimp on this part to tone down the scare but not Harper & Almara. As the three ghosts come visiting not every episode from the original book is given equal importance, but I felt here they took artistic licence to first shine on Scrooge's uncharitable nature and second show how he learns that the gift of charity brings self-happiness. Very well done! One thing I particularly enjoyed was the Ghost of Christmas Past was depicted as a little candle man with his face a flame of fire and a hat that would snuff out his light when Scrooge could no longer handle the light being shone on his past deeds. Nice introduction to the classic, conversely a fun new look at it in graphic format. You usually can't go wrong with Capstone's Graphic Resolve series.