Jack the Ripper by François Debois 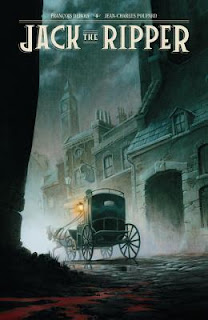 by François Debois; illus Jean-Charles Poupard
My rating: 4 of 5 stars

Absolutely loved this! A fun new twisted take on the Jack the Ripper case involving one of the original detectives, Frederick Abberline. A good portion of the story retells the actual Ripper story factually with some artistic license to fit the author's continued gothic tale of murder involving a secret science society dabbling in medical hypnosis to cure hysteria and other mental diagnoses with much more murderous and psychotic symptoms. After the action in Whitechapel, the truly fictional part moves on to Paris, France and even has a brief interlude in America. Real characters from the historic case have a part in this crime story making a fun historical crime thriller, such as Dr. William Gull, Police Commissioner Charles Warren, John Pizer and James Maybrick. This is not a serious treatise on the Ripper case but a very fun fictional whodunnit which I enjoyed very much. The art didn't quite wow me but was ok and certainly atmospheric.