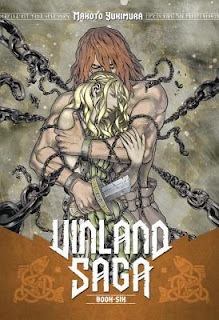 It has been almost a whole year since the last volume of Vinland Saga came out and it was with great anticipation that I started reading this next one. I was not disappointed. When we left Thorfinn in Vol. 5 his life had changed drastically and new horizons were in front of him, this is where our story now picks up. The first half of the book is devoted to politics, war and King Canute as he works on his army in Denmark to hold onto his newly gained lands in England. The scenes switch between here and Thorfinn and fellow slave Einar back at their master's farm. Great events are happening which will bring the war home to them. The second half of the book concentrates on Thorfinn, the slave, and his new coda of peace that he must live up. He isn't a Christian (yet?) but he listens to Bible readings and his self-induced code of conduct could easily be compared to the teachings of Jesus. He wants to end war and slavery while atoning for his past transgressions. The most powerful image in the entire book is a scene with Thorfinn carrying the corpses of all the people he has slain upon his back, saying he can carry this load but could not handle even one more soul. Leif Erickson is back on the scene briefly and Thorfinn remembers a childhood conversation of a land faraway where there is no war or slavery. The story is becoming very inspirational and Thorfinn's strength and determination is being pushed with as much vehemence to his new moral standards of non-violence as it was previously towards his revenge. Don't get me wrong though there is still a lot of brutal savagery in the story, this is war, these are the Vikings, Yukimura is keeping it very real! Amazing manga of epic proportions.