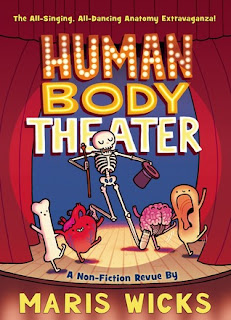 by Maris Wicks
My rating: 4 of 5 stars

Graphic novels have successfully taught and brought to life history but not so much for other educational topics. Science has been done before and I've found it hit or miss. Human Body Theater manages to present an in-depth look at human biology while providing entertainment. A skeleton is the M.C. for a "play" which discusses all the human body systems and parts. The material covered is quite extensive and the book's main objective is to impart knowledge. While doing so cute cartoon figures have been used, adding arms, legs, and eyes to cells and organs, etc. The tone is one of levity and there is a sense of humour throughout. It's a lot of fun. I'll address the topics of puberty and reproduction in particular. As a Christian, I thought the puberty section was well-done. It is candid and thorough, but all illustrations are of the inside workings, so no nudity and the topics discussed remain factual not venturing into any territory some would consider moral issues. The reproductive system was handled well also and written in a way trying not to offend anyone. I found it to be on the PC side but acceptable. Again, no nudity and this is about the system not about sex at all. The PC part that tries to please all concerns the development of the unborn. The word "baby" is not used until the 9th month, the unborn child is referred to as a "fetus" throughout except for the zygote stage at which it is referred to as a "clump of cells". Altogether a well thought-out primer on the human body with extensive information, entertaining, and a light tone. Suitable for any age mature enough for the depth of knowledge imparted.