Omaha Beach on D-Day: June 6, 1944 with One of the World's Iconic Photographers by Jean-David Morvan 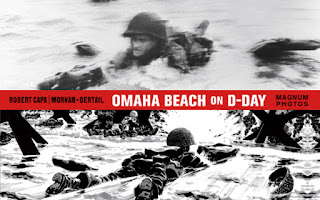 Omaha Beach on D-Day: June 6, 1944 with One of the World's Iconic Photographers

by Jean-David Morvan
My rating: 5 of 5 stars

Outstanding nonfiction graphic retelling of WWII's Omaha Beach through the eye's of photojournalist Robert Capra. This is both Capra's story and an accounting of the D-Day battle. Through graphic art panels, photography, and essays the reader is taken right into the middle of this famous event which molds itself around Capra's famous photograph "Soldier in the Surf". The majority of the book is told in graphic novel format and tells Robert Capra's story of being a photojournalist during WWII, especially his involvement in Omaha Beach and the famous photographs he took that day. Following that are the photographs themselves, entitled "The Magnificent Eleven" as a group and, in conclusion, there are three essays illustrated with photos by Capra, of Capra, and by others which give a deeper insight into both Robert Capra, the man and Capra the photojournalist as well as the story behind the iconic photograph, "Soldier in the Surf". An excellent book which gives an emotional and personal account of a moment in history which is directed to the general reader, whether they be adult or teen.